Konda Reddis are inhabiting on the banks situated on either side of river Godavari in the hilly and forest tracts of East and West Godavari and Khammam districts of Andhra Pradesh. Their mother tongue is Telugu.

They are recognized as Primitive Tribal Group. Konda Reddy tribe is divided into exogamous septs for regulating matrimonial relations. Like other Telugu speaking people, their surnames are pre-fixed to individual names. Generally, each sept is exogamous but certain septs are considered as brother septs and marriage alliances with brother septs (agnate relations) are prohibited. They are primarily shifting cultivators and largely depend on flora and fauna of forest for their livelihood. They eat a variety of tubers, roots, leaves, wild fruits etc., They collect and sell non- timber forest produce like tamarind, adda leaves, myrobolan, broom sticks etc., to supplement their meagre income. They cultivate largely jowar, which is their staple food. They also grow ragi, red gram, bajra, beans, paddy and pulses. They eat pork but do not consume beef. 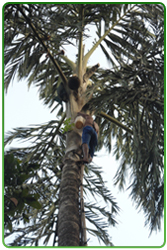 The Konda Reddi family is patriarchal and patrilocal. Monogamy is a rule but polygamous families are also found. Marriage by negotiation, by love and elopement, by service, by capture and by exchange are socially accepted ways of acquiring mates. Levirate is in vogue. They worship Muthayalamma (Village deity), Bhumi Devi (Earth Goddess), Gangamma Devi (River Godess) etc., and celebrate festivals like Mamidi Kotha, Bhudevi Panduga, Gangamma Panduga and Vana Devudu Panduga.

Konda Reddis have their own institution of social control called 'Kula Panchayat'. Each village has a traditional headman called 'Pedda Kapu'. The office of the headman is hereditary and the headman is also the Pujari (priest) of he village deities. The younger brother or nearest male relative of 'Pedda Kapu' acts as his assistant and substitutes in case of absence of Pedda Kapu from village and he is called 'Pinna Pedda'. The offences like adultery, incest and cases of divorce and inter dining with persons of other community are dealt by the village panchayat. The men and women folk jointly perform dance on festive and marriage occasions.

Valmikis living in this Agency tracts of Andhra Pradesh are the only group notified as Scheduled Tribes. They are found in the agency areas of Visakhapatnam and East Godavari districts. They claim that they are descendants of the famous sage Valmiki, the author of Ramayana. The literacy rate among Valmiki is higher than that of Konda Reddys.

Marriage by mutual consent, marriage by elopement, are the methods of acquiring mates. Widow remarriages and divorce are permissible.

Valmikis are agriculturists and forest labourers. Some of them became traders and petty moneylenders. They sell the earthen pots also in the shandies. They practice podu cultivation on the slopes of hills.